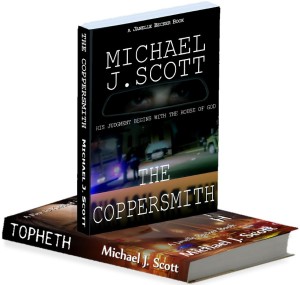 Gumshoe Casefiles: Case Adam Slade. Volume 7. Justin Tilley. Following the Fire. Bill Vassilopoulos. He peered out at the corridor, willing himself unseen. A pair of heavy brown shoes appeared, beating out an even path to the door. He held his breath, feeling a bead of sweat run down the width of his forehead and crash to the ground, almost certain its impact would reverberate, deafening against the hallowed floor. The footsteps paused, and then turned in his direction.

He could just see the leather toe of the shoe, hesitating near him. There was a resounding click! A moment later, the front door closed, the key turned in the lock, and the footfalls retreated down the steps. Gradually, he let his muscles relax. He hurt all over, and his breaths came out in tight, rapid pulses of air.

He swallowed and pushed himself out from under the pew and stood there a moment, letting his eyes adjust to the darkness. He moved quickly over to the window, where clear plastic replaced the broken stained glass on at least one pane. His knee slammed into the back of the pew and a small yelp escaped his lips. He bit his tongue, refusing to cry out. Peering through the plastic pane, he watched as the figure he guessed was the church custodian ambled down the sidewalk until he was lost in shadow.

Finally, he let out his breath and sat down on the pew nearest the window. In the light that filtered from outside, he pulled out his fire-making kit. The bottle of gasoline caught in his pocket as he removed it, forcing him to turn the pocket inside out to free it. It came loose with a wispy thread caught on the lid. He tucked the pocket back inside his pants and set the bottle on the bench beside him.


Next to it he set the lighter. He sat upright and looked around again, startled by how eerie the church felt, ensconced in shadow. Pale light filtered in muted hues from the stained glass windows, caressing the backs of the pews and glinting daintily off the far wall. He clenched and unclenched his fingers, wiping his sweaty palms on his pants several times to dry them. Fire blazes before him, roiling clouds of black smoke smelling of burning vinyl, fuel and rubber. Inside is Ashley. Little Ashley. He reaches for her but a wave of heat slams him to the ground. Ashley, Ashley! He picked up the bottle and the lighter, striding quickly to the front of the church.

He splashed the fuel across the altar, the pulpit, and the new screen for the projector. He ran a line of it along the back bench of the choir loft, watching it dribble in sagging streams down the back of the pew.